The World of Elfquest

So you came here to find out what all this elfy stuff is about. This is meant just as a teaser to look for more. There might, however be some spoilers to the plot.

Elfquest is, as the name says a story about a Quest. Now this is admittedly a common theme in Fantasy. But do not turn back because it sounds conventional. This Quest will lead the reader in a world of magic, age old secrets, passion and love. And also fun!

It all starts off with the Wolfriders, a small tribe of forest dwelling elves, closely bonded to their wolf-friends, who are driven from their holt by fanatic humans, who set the forest on fire.
The leader of this band is Cutter, blood of Ten Chiefs. Young, but brave and determined, he has the loyalty of his tribe.
Fleeing from the fire, the elves seek refuge in the troll caverns. The troll king, who is not happy about this invasion of his underground realm, promises to show the elves a new land, where they can live in peace.

However, the trolls duplicity shows, when the Wolfriders stand at the end of a tunnel opening up to a burning desert, with the way back closed to them.
Determined not to let his people die, Cutter leads them across the deadly waste. As they reach the mountains seen from afar in three days of hunger and thirst, they find not only water, but make an incredible discovery. Here in the oasis of Sorrow's End are other elves. The world view of the Wolfriders who thought they were the only children of their mythical ancestors, the High Ones, left, changes in the blink of an eye. 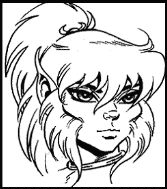 From here enfolds the true Quest, Cutter's search for other elves, and the origins of their kind. They will find, that an enemy among their own race can be deadlier and more dangerous than any human. They will suffer and learn and grow.

Elfquest is the creation of wife and husband-team Wendy and Richard Pini.
Wendy is an outstanding artist with an amazing skill for facial expressions and emotions. In style and movement, the comic is influenced by japanese manga, and Wendy's love for Nouveau Art shows in the graceful flowing forms.
Richard is co-writer, editor and publisher in one person. The two founded Warp Graphics back in the 70ies, when noone wanted to publish their comic.

More than just an entertaining story, Elfquest is a colourful reflection of our own reality. Without ever being in the least moralisic, Wendy and Richard have given their elves a message for everyone whose heart will listen. In a world of cruel survival tolerance and respect rules, bonds of love and friendship makes our heroes go on.

Unlike most other comics, every character in Elfquest has depth and is 3 dimensional. There is no black villain without any further motive than to be bad, and the heroes have their dark sides.Even the supporting characters are really there, and if we don't know much about them, then only because their story has not been told yet.
When reading the comic, one notices the extreme richness in detail, the multi-layered storytelling technique, which make Elfquest "real".

After finishing the Original Quest (20 issues) and two short series ("Siege at Blue Mountain" and "Kings of the Broken Wheel"), Wendy has let other artists contribute to their magical universe. Wendy has thrown herself mostly into the ongoing project of the Elfquest movie, but is still ocassionally working on the comics or other things like calendars.

In 1998 EQ celebrated its 20th anniversary.
In early 1999 the monthly comic came to an end. Warp Graphics is now publishing all their old and new stuff in graphic novel form. For a list of the most important comics and the various editions of graphic novels, look up my Guide. If you want to know more about Elfquest and Warp go to Elfquest.com.

Sometimes it seems, as if those elves are quite a handful for their 'mental' parents. ;-)